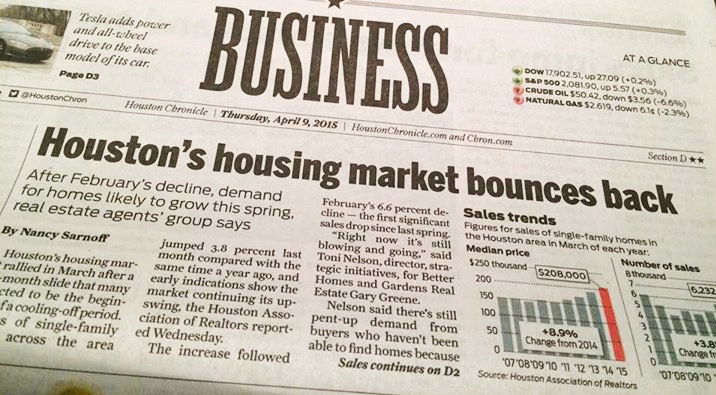 The following data was gathered from the March Houston MLS Report, published by the Houston Association of Realtors. The data covers and real estate trends from the last twelve months.

HOUSTON — (April/2015) — After February’s decline in sales volume, Houston home sales returned to positive territory in March, with consumers buying newly listed homes before they ever had a chance to replenish the local housing supply. Sales of single-family homes rose 3.8 percent year-over-year in March, with most activity taking place among homes priced between $250,000 and $500,000. The high end of the market also had a gain after experiencing its first decline in many months in February.

March single-family home sales totaled 6,232 units compared to 6,005 a year earlier, according to the latest monthly report prepared by the Houston Association of Realtors (HAR). Buyer demand offset a 7.3 percent increase in new listings, keeping inventory levels down. Months of inventory, the estimated time it would take to deplete the current active housing inventory based on the previous 12 months of sales, increased only fractionally to a 2.8-months supply. That remains well below the current national supply of 4.6 months of inventory.

Home prices achieved record highs for a March. The average price of a single-family home rose 6.5 percent year-over-year to $276,837. The median price—the figure at which half the homes sold for more and half for less—jumped 8.9 percent to $208,000.

“It was great to have sales back in the black in March after February’s decline, but in order to satisfy the long-term needs of the Houston housing market, we need to see substantive growth in inventory levels, which remain at record lows,” said HAR Chair Nancy Furst with Berkshire Hathaway HomeServices Anderson Properties. “It could take the remainder of this year to begin approaching what we consider a ‘balanced market,’ which is typically a five- to six-month supply of homes.”

Contact Kevin Macicek,  Broker/ Owner of areatexas.com  for help on buying or selling a Houston home.

Area Texas Realty & Management is committed to ensuring that its website is accessible to people with disabilities. All the pages on our website will meet W3C WAI's Web Content Accessibility Guidelines 2.0, Level A conformance. Any issues should be reported to info@areatexas.com. Website Accessibility Policy